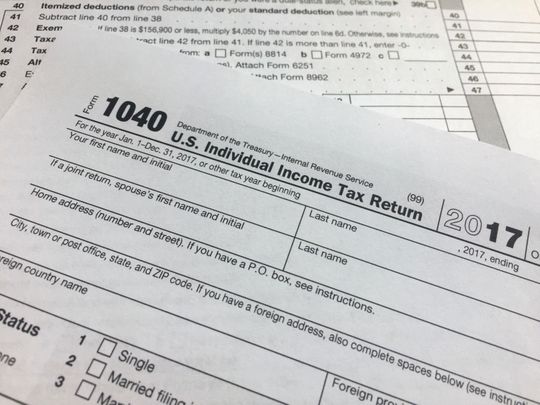 The White House and congressional leaders released a framework for tax changes, but many key details have been left to tax committees. Here’s how that process is working. Jeff Dionise, Ramon Padilla, Paul Singer and Herbert Jackson, USA TODAY

The Internal Revenue Service will waive penalties against taxpayers who withheld too little of their pay last year because they were uncertain how President Donald Trump’s tax cuts would affect them, officials said Wednesday.

The Trump administration said it expected 90 percent of taxpayers to owe less income tax under the Tax Cuts and Jobs Act of 2017. Most taxpayers have already seen the benefits, as employers withhold less money from their paychecks.

But some might have withheld too little. Some taxpayers – particularly those who already pay higher state and local taxes – could end up owing more when they file their returns in April.

That’s because the law limited the ability to write off state land local taxes. The new cutoff for a married couple filing jointly, for example, is $10,000.

The tax law also suspended personal exemptions – tax reductions for each additional member of the household – in favor of a larger standard deduction for everybody.

“We realize there were many changes that affected people last year,” IRS Commissioner Chuck Rettig said. “This penalty waiver will help taxpayers who inadvertently didn’t have enough tax withheld.

“We urge people to check their withholding again this year to make sure they are having the right amount of tax withheld for 2019.”

Just last month, the IRS was warning of a “tax-time surprise” for taxpayers who didn’t pay enough taxes in 2018.

“Though most 2018 tax filers are still expected to get refunds, the number who owe tax, and in some cases a penalty, is likely to be larger than in recent years, and many of them are likely to be people who have always gotten refunds,” the agency said last month.

The waiver announced Wednesday will be available to taxpayers who withheld or made estimated payments totaling at least 85 percent of their taxes due.

The IRS previously waived penalties if taxpayers withheld at least 90 percent, but the IRS commissioner can expand that waiver in unusual circumstances when the additional tax would be “against equity and good conscience.”

The IRS has recalled 36,000 more furloughed employees – more than half its workforce – to help process tax returns and refunds for tax season.

The tax workers were sent home in December when Trump threatened to veto any spending bill that didn’t include $5.7 billion for a border wall. The partial government shutdown is now the longest in U.S. history.

The Trump administration has promised that refunds will go out as usual. But other customer services, such as tax assistance by phone or in walk-in centers around the country, will be limited.

Sen. Ron Wyden, the top Democrat on the Senate Finance Committee called the announcement Wednesday “a step in the right direction,” but said “more data from the IRS is needed to determine whether their action provides relief for a majority of taxpayers.”

“The longer Trump drags out his government shutdown, the greater the uncertainty for families,” the Oregon lawmaker said.